During 9 days from 8 to 16 Sep, we hike and bike nude in the Münsterland – the extraordinary summer of 2018 still continues in September.

► Sat 8: Warm-up hike near Lintel in the northern Münsterland [9 September 2018]

As a warm-up for the Westphalian Naturist Days, 15 participants

hiked 15 km in the nude. The sky was mostly cloudy, made way for a sunbeam every now and then. The storm loss caused by storm front Friederike, which was well known from a hike in April, were removed in the meantime except for some climbing obstacles. Shortly before the end of the hike we could swim in the warm water of a forest lake, get rid of

dust and sweat, before we went to the restaurant Parkhotel Nordwalde for dinner.

One of the participants hiked with us for her first time and stayed dressed, after her husband had told her, that whoever does not want, of course, does not have to undress, but is still welcome. She liked the tour so much among all the nude people, that she wants to repeat.

up to 23°C, 5°C above yesterday's maximum. Right from the beginning, the 15 nude hikers could enjoy bright sunshine. So, some of us opted to replace a part of the 20 km hike by distance swimming in the Ems River. Also, a bath in the Dortmund-Ems Canal was available.

A woman, who was walking her dog at the Ems, asked many curious questions about the hobby of hiking in the buff. She gladly accepted our informational brochure to read more about that.

14 naturists gathered. 11 opted for a bike tour, although the temperature did not rose above 18 °C in the morning and evwn later, the airstream at 21 °C cooled down the bikers significantly. The two long-distance hikers enjoyed the special situation, where they could speed up as they could. The third hiker opted for a shorter hike.

At the evening, bikers and hikers gathered for a refreshment at the restaurant Zum neuen Herd.

Biking through a forest at the Ems River

Group of hikers at a beach at the Ems River

We gathered directly at the Ems River. 7 hikers, two women and five man, and an American Collie stayed near the river: They hiked along renatured meadows at the Ems River in the Warendorf district. In the course of the day, the weather turned into a real summer day with 25 °C and lots of sunshine. Their hike of 20 km took place completely in the meadows at the river. Several times, you could take a refreshing bath. The bikers, due to a distance of 50 km, also drove through surrounding fields, meadows, and small forests. We enjoyed to be warmed by the sun, because although the thermometer already showed 20 °C at the start time, the wind blew unpleasantly violently. Soon, however, the sun had accomplished its work: Air temperature rose to 25°C, so that we did no longer perceive the strong breeze as cold.

For the first rest, the biking and hiking groups met on a piece of meadow in the sunshine. Afterwards, we followed different paths anew. Finally together again, we enjoyed the end of the day at the restaurant Alter Gasthof Seiling in Telgte having hearty, local dishes.

Sporadic sunshine and an air temperature of 21 °C invited the 11 naturists to hike 15 km through the Emsauen towards Warendorf. Farmsteads with countless paddocks and alternating fields lay along our path, but also nature trails along the Ems and Hessel rivers offered numerous opportunities for nature studies. At the find spot of the Neandertal Man at Neuwarendorf at Kottrup Lakes, we had a rest break, where a parked car served as a food and beverage station for the group. Here, we could use a table with benches – as built especially for us.

After the lunch break, we went back downstream along the river Ems. An announced cold front, which had arrived in the meantime, became noticable with strong adverse winds and sinking temperatures. So, it was good to be able to dive into the ind shadow within a small forest several times. Back at the parking lot, the thermometer showed 16.8 °C: Time for a hot coffee.

Due to a dense blanket of clouds,

wind and 14°C, the 10 naturists started clothed. During the hike, it got better and, little by little, we reached our personal sense of well-being, so that we got rid of our clothes, before they were in danger of absorbing sweat.

It became even warmer (up to 19°C at the end of the hike) and sunnier, so that the participants had a successful hiking day. At the end of the day, we enjoyed a wide range of food and drinks and an amiable service in the hotel and restaurant Zur Prinzenbrücke.

16 hikers had gathered at the start-parking lot and were pleased about bright sunshine and blue sky. Warming rays made us completely forget, that the air temperature was only 17 to 18°C in the morning, but exceeded 20°C after lunch. After 3 km, another naturist joined the group. The total distance of 18 km was too long for him and he had planned his 10 km short hike in such a way, that he could hike the highlights Dortmund-Ems Canal and Venne Moor with the group.

At the Dortmund-Ems Canal, our group encountered a biking naturist, who could not make in time to the starting place: He undressed, joined the group – and left his bike attached to a fence. At the end of the sunny hike, we were tempted to have a stop for refreshment in the restaurant Gasthaus Eickholt in Davensberg. Mmmh, delicious!

After nude breakfast buffet and skittles in the restaurant Zum neuen Herd near Nordwalde, we enjoyed nature in the Bockholter Berge [en: Bockholt Mountains] during a short hike of approx. 10 km and then toured the construction site at the bridge, that leads the Dortmund-Ems Canal over the Ems River. The construction progress compared to our visit at the end of April was clear.

On the final Sunday of the WNT 2018, we could enjoy sunshine and temperatures up 24°C. 24 participants splitted into groups of 13 bikers und 11 hikers. As part of the 15 km hiking trail, the hikers had the option to wade a creek. Those, who did not want to take advantage of this refreshment or were afraid of wet feet, could alternatively continue their hike on dry paths with a short detour.

The bikers did a circuit of 49 km through the Dülmener Münsterland. For lunch, both groups met again at the rest break, for which a car was parked near the enclosure of the Dülmener Wildpferde [en: Dülmen Ponies]. Afterwards, we went again on different paths until the return to the start-parking lot. Then, the restaurant Haus Waldfrieden fulfilled all wishes regarding coffee and cake, ice cream, cold drinks and hot meals. Finally, participants thanked the intiators, Mic and Rainer, and then bid farewell – until the next WNT at the latest. 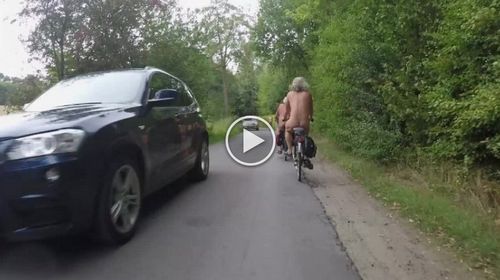 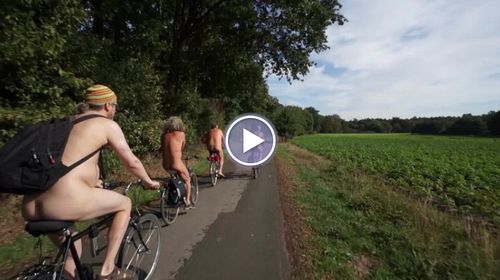 
How these butttons work
Buttons with an arrow up or down switch by date to the next or previous report respectively. Each other button moves to a compiled overview of reports by country, category, or date.
These compilations display some of the reports embedded.
Below that, the compilations offer all regarding reports as clickable photo icons (by country, by category) or clickable headlines (by time). Clicking on these will open the regarding single report.
Clicking a button within a report, which is displayed embedded, works the same as in the single report itself.
Select article
Sitemap
Enter search item: