The “Special Meeting” by Petra and Uwe is always fun for approx. 40 naturists in a rented hut. Besides sauna and nude hiking, bodypainting takes place. Our presentation was rewarded with icecream. The long weekend beginning with Corpus Christi

in 2019 was again an opportunity for naturists to gather for naturist days in the Harz Mountains and to undertake naturist activities together in the Oberharz region.

During these naturist days, 13 of the naturists participated in a bodypainting. After the already traditional presentation of our body-art works between church and town hall in Clausthal, some of us enjoyed

a delicious ice cream. Other guests and passers-by first showed their surprise at the colourful “dresses”, then greeted back friendly and took an unusual memory home.

After the trip to Clausthal, some of us did a short hike before dinner. We encountered a family with two boys and two girls. They obviously had a lot of fun in view of our picturesque skin art, and when we told them about having ice cream in Clausthal, they had to laugh out loud – their cheerfulness sounded for quite a while.

Those nudevents in the 'Münsterland' region in Germany in June / July, which had to be abandoned or cancelled, are now put onto the agenda again at end of August expecting more stable weather conditions. We were not only lucky having pretty good summer weather, but also could enjoy our nude performance as a gift to inhabitants of Münster (Westf.) and visitors, who were attracted by 'Sculpture Projects Münster 2017'.

Eleven nudes enter the bridge and move slowly to the center.

The middle of the bridge is reached. They all turn clockwise and show the letters 'LEBENSWERT.' [en: WORTH_LIVING.] – the motto of the city of Münster.

After about half a minute, all naturists turn around and show the lettering 'NATÜRLICH.' [en: NATURAL(LY).] and the logo of the City of Münster. Naturism is just natural. We have to calm down the security guys, who are in red t-shirts: 'We are doing an art project here!'

Change of position. In order to be able to read our inscriptions from the other side of the harbour, we have to change the order of the naturists. The security guys take care, that we do everything right.

Now, we are the other way round, and the people on the waterside side with the many restaurants can finally read: 'LEBENSWERT.' [en: WORTH_LIVING.], while from the other side now, '.HCILRÜTAN' can be seen from left to right, i.e. correct from right to left.

Once again, we turned around to show people in the restaurants: Naturism is 'NATÜRLICH' [en: NATURAL]. The photographer on the other side now sees '.TREWSNEBEL' from left to right, correct again from right to left.

In all 4 positions, we have stayed for about half a minute. Now, our message has been understood and we are going back to the waterside. There is applause. Thank you!

After the performance, one of us answered questions of a young family about what they just saw. The three children at the age of 4, 6, and 8 years really liked it, and their parents as well.

Münster is LEBENSWERT, they all here know it, so they live here, NATÜRLICH!

German newspapers 'Westfälischen Nachrichten' and 'Münstersche Volkszeitung' report on our nude performance on Saturday evening and promote this action as part of the Sculpture Projects Münster 2017.

Some of the visitors to that sculpture might have rubbed the eyes or cleaned the glasses that Saturday evening. The currently most visited sculpture of Münster, Ayşe Erkmens »On water«, was captured by eleven nudes, who had painted the sequence of the letters »lebenswert« [en: worth living] and »natürlich« [en: natural(ly)] on the front and the back of their nude bodies. And now they were holding hands solidarily without any clothes on Münster's iconic footbridge »On Water«. Notable resistance to the nude takeover did not happen. The whole action was not, as you might believe, planned by long hand, emphasised the participants, nine men and two women, who during the morning had met at the Westphalian Naturists Days. The focus of that days was hiking, swimming, or cycling, all of which carried out in the nude and in harmony with nature. The combination of natural nudity and art evoke a particular interest. And so, amongst the participants the idea emerged, to reflect the artwork »On Water« by Ayşe Erkmens in »their naturist way of life and to add another experienceable facet by means of a combination of body painting and spontaneous nude performance (…) a half-new look to what is known«, as it is stated in an academic press release.

The courageous eleven nudists were curious about the resonance, which of course did not fail to appear: »Reactions from other visitors did take place«, reports Helmut Schultze, who participated lively: »Others left space to us and watched our performance attentively. Also from the footbridge, you could read the words »Natürlich« and »Lebenswert«. Many visitors interviewed us. Also, reaction from the audience on the waterside, which was estimated to about 3,000 visitors, took place: Applause! Some of the security staff reacted irritated and asked us to leave the bridge. Otherwise the police would be called. Our explanation »This is an art project« helped us to to gain some extra time without disturbance and thus helped us to finish our performance. In any case, photos and probably some video material should have been recorded.«

The public action of the naturists is not motivated politically. Helmut Schultze: »Our approach is not political, but rather social: We live naturism and recognise this mental attitude as deeply human and natural – as against consumption-centric orientation, wasting resources, and environmental destruction, with which the present humanity is going to turn our planet uninhabitable soon.«

The organising team of the SculptureProjects took the action, which they could not change any more, calmly. »The dock at the port is freely accessible to all visitors. Since the group has not pushed or harassed anybody, they are free to walk on the footbridge like any other visitor«, the press office of the #sp_muenster from Domplatz said.

The arts-minded naturists took their inspiration, among others, out of a nude visit to the exhibition »The bare life« and a spontaneous performance »How little abstraction does art tolerate?« by the psychologist and nude artist Milo Moiré on the final day of that exhibition in the LWL-Museum, Münster (Westf.) in February 2015. All official art, so to speak.

The naturists, used to the jargon of art, managed to »add another new aspect« to Ayşe Erkmens' site-specific intervention, as the press release of the artful nudes calls it.

The Initiative of Active Naturists, which communicates by Internet, is active for the promotion of tourism in the Münsterland region in Germany since 2016. (Fb)

Norbert Sander, publisher of photo books “Nackedei” and “Nackedei 2”, plans a 3rd volume of his series of books. In search of new ideas and motives, he participated in the TNT hike on Monday on the “Saale-Horizontale”. Here is an excerpt from text and pictures, which Norbert made available to us in advance:

Some people, who looked on Monday from the city of Jena to Kernberge Mountains, 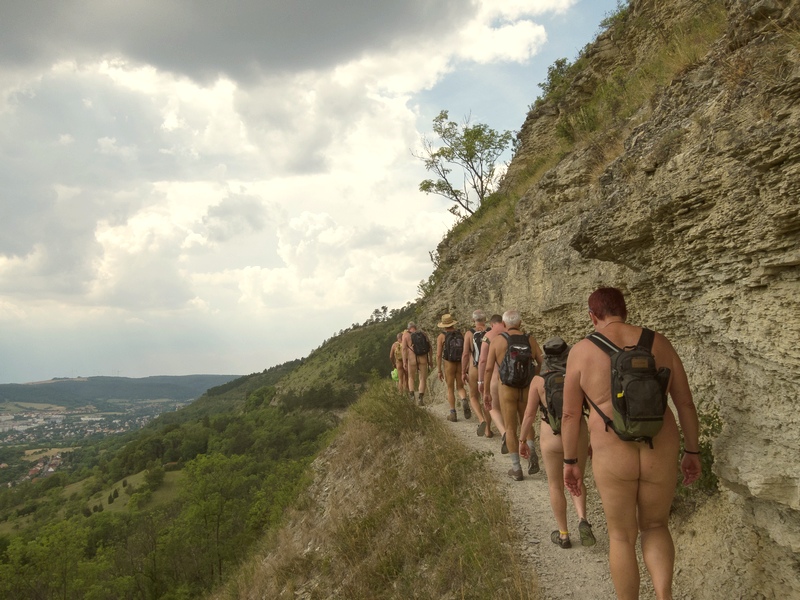 nearly did not trust own eyes: Obviously, a group of nude people was moving high above the roofs of Jena on the Saale-Horizontale. Anyone, who thought that was a mirage at the high temperatures, had to understand with a second look the latest, that that was not the case: Yes, actually 31 nude ramblers moved from Radis in the direction to Ziegenhain. The Jena photographer Norbert Sander, publisher of a series of books called “Nackedei”, accompanied the hikers and caught some impressions. They should find their place in the 3rd book of the “Nackedei” series in 2019.

Although men were clearly in the majority, there were also some women. Andreas from the vicinity of Rudolstadt has been initiated the “Thüringer 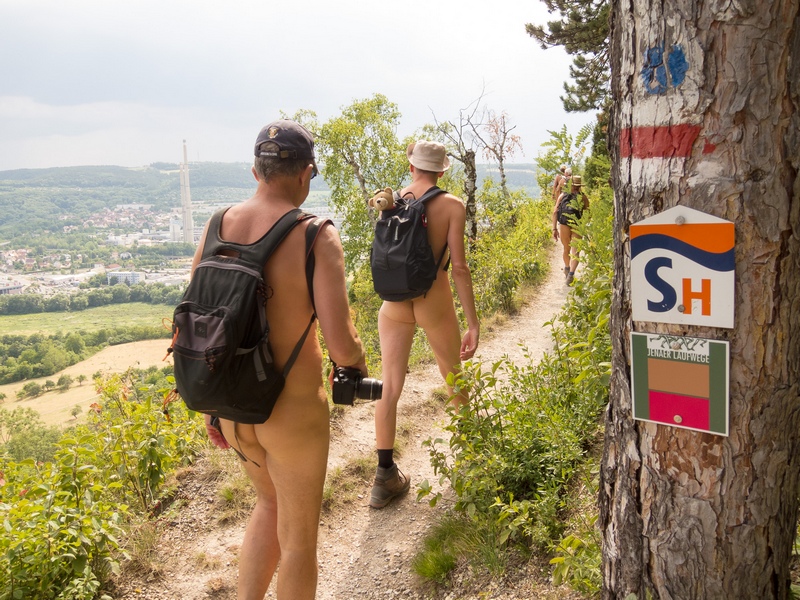 Naturistentage”, which are becoming more and more popular. “There is a base of fans participating regularly. Many plan this very definitely for their holidays.” For example Rita and Dieter from Schmalkalden, who participate almost the whole week. There are such beautiful spots on the doorstep, you don't even have to go far away. This is the tenor of many participants. Nevertheless, naturist hikers from all parts of Germany also take part. They come from Rhineland, Palatinate, Bavaria, and Saarland. And above all from Saxony. There, the “Saxon Nude Hiking Days” will take place at the beginning of August. Participants from England and France also appreciate the nude community.

This year's hikes take place from 14 to 26 July. The routes are mainly completed in the Saale Valley Dam region, in the Thuringian Forest and near Bad Klosterlausnitz. On 18 July, there will be a cycle tour and on 20 July a canoe tour on the Hohenwarte Dam. There is also a central accommodation for those, who take part in several hikes.

More than 40 naturists from Germany and the Netherlands met in the 'Harz' Mountains for some days of nudevents. On Sat 17 June, bodypainting was an addional option:

Due to air temperature of only 16°C and a cloudy sky, those 20 naturists, who had applied for a bodypainting, were happy to have a heated space – preparation and painting did even last some hours. Finally, we presented ourselves as living works of art to the public on the marketplace in the centre of Clausthal between church and 'Rathaus' [en: townhall].

Presentation of bodypainting art
in front of a townhall