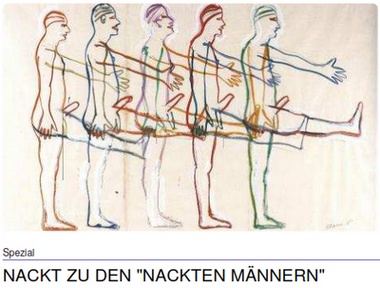 With the slogan NACKT ZU DEN NACKTEN MÄNNERN [en: NUDE TO THE NUDE MEN], Leopold Museum in Vienna invited the public to four guided tours in the nude on 18 February 2013. Altogether, almost 300 female and male visitors in the altogether gathered. For the statisitcs: Visitors aged beetwen 20 and 70, 15 % of them female.

The other side of … the museum

Strolling around the museum nude, appreciating and understanding art: This was the order of the day in the middle of February at the Leopold Museum in Vienna. »Nackte Männer in der Kunst« was the title of the exhibition, which presented top-class exhibits depicting nude men from ancient Egypt to the present, a period of 6.000 years.

Several groups of naturists had gathered among all the portraits of nude men, to be guided through the exhibition being nude, too. Thus, one felt being nude at the right place and faced the rigid pose of an Egyptian ruler not disguised but at eye level, or you even strike thea pose of the seductively graceful posture of a bronze, Greek youth – as well as you could, because the idealised elegance and grace of classical statues are rarely achieved by living people.

The fact, that the exhibition "Der nackte Mann" [en: The Naked Man] was successful, too, with a very similar objective in the Lentos Art Museum in Linz, only 150 km away from Vienna, speaks in favour of the relevance of the theme: Nudity is topical and is picked out as a central theme, perhaps even male nudity as a secondary success of the emancipatory movement. Also, nudity is present in art and in everyday life.

Both exhibitions make it plain to the visitors, that the performing arts have always preferred the female body, but portraits of nude men could always be found next to it. With the new awakening of nature awareness and the invention of naturism around the turn of the 19th century into the 20th century, but above all through the industrial distribution in advertising and the illustrated press, the depictions of nude people increased sharply overall – even though art stayed increasingly behind. But even today, you can still find in all areas far more presentations of female bodies than of nude men.

Both exhibitions conveyed this development in a qualified guided tour from early art history to the present, which was repeatedly marked by changing phases of greater artistic freedom or massive rigour in the depiction of nudity. In modern naturism, nudity can finally be experienced and lived as a matter of course again, but the prudery spilling over from the USA or by religious dress regulations still threaten this regained natural freedom of people. 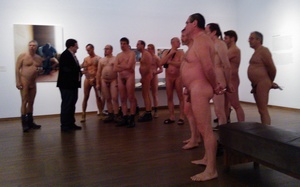 Without clothes, our art tour guide would have misremembered his text – he says.

At the end, all visitors were queueing to get their clothes back

The Süddeutsche Zeitung's quite sceptically criticises the exhibition in Linz, expressing regret: "Nobody (of the visitors) follows the spontaneous impulse to take off the clothes. We have at least refuted that and acted out the "modern adult dream" described by Sigmund Freud.

The range of exhibits in Linz as well as in Vienna is also aptly described by the Süddeutsche: "Thus one goes out in a post-Freudian mood and knows that the man without clothes is both: a culture-forming force and a laughing stock." The exhibition in Linz, which somehow emphasised the phallus, was probably the reason for this ambivalent assessment. We naturists, however, do not accept this: We are just people in the conscious tradition of several millions of years of nude human history.

Links to reports regarding the evening in the nude at a museum:

Even football would be much fairer in the nude:
No one could hold the opposite number unfair on the jersey!