… in walking barefoot comes up: sandals taken off, because they can be carried better in the hand instead of on foot. You can hardly let the feet sink more gently in, than in such a comfortable environment! Instead of walking on barefoot trails, I use the AIREX Balance Pad now in winter: You sink in there also (a little) and keeping the balance on the flexible ground trains the muscles of the feet particularly, when lifting a leg from the mat!

The last weekend of September should again spend a nice and warm weather, so the initiators of the WNT offered a continuation: 17 naturists splitted into a hiking and a biking group and started their tour with sunshine at 19 °C.

For the bikers, the airstream was still a bit cool, but the temperature arose quickly and reached over 25 °C. 58 km made the biking group on their tour, the hikers needed an hour and a half longer for their 24 km.

Bikers and hikers in the north-western Münsterland were greeted with funny comments or questions. The hiking group frequently passed farms along their trail, where they were often waved and greeted by joyous groups of children and their adult companions, while the men and elder youngsters of the farm worked on the corn harvest in 12-hour shifts.

Towards the end of the hike, a group of nude bikers met the group halfway. A sportive biker, who passed them at the same time, said: 'And I always thought, I was clothed slightly, but you do it right!'

At the end of the day, we stopped again for a bite to eat at the inn 'Das kleine Kartoffelhaus' [en: The Small Potato-House] in 'Altenberge', where the naturists were served again exquisitely. Because a dinner in the nude in August in Altenberge has been well around, we also left here some informative brochures about nude life for information for interested restaurant guests.

Hiking in the buff – sometimes also barefoot on rough ground

The last Sunday in September once again offered a high summer day with temperatures of up to 28 °C and dep-blue sky. Nude hikers in Münsterland, nearby Hamburg, nearby Marburg and in Swabia felt attracted by nature, in order not to miss this splendid day.

Of course, many groups, who prefer to hike or cycle in sweated clothes, had also made their way into nature, and so many encounters between nude and clothed nature lovers happened on this day, all of which were in friendly, mutual understanding. Particularly noteworthy were the farmers active in 12 to 13 hours of work, who wanted to use the dry weather and bring their corn harvest before the next rainfall.

In the south-western part of Münsterland, an international group of hikers had gathered. We had the option to walk through a meadow or through a neighboring brook, the latter also offered an occasional whole body cooling.

The final visit at the restaurant 'Haus Waldfrieden' was dominated by a Bavarian-style 'Oktoberfest', whose original is celebrated each year 600 km away. The most popular dish was Bavarian 'Sauerbraten', which shows a much more distinct taste compared to the dish with that name in the Rhineland. We were very satisfied!

The hike on Saturday, 24 September 2016, started several times surprising: Despite the directions given, two fellow travelers were not sure, at which wind power station we would meet. "You're funny, there are so many wind power station here," one of them said. It is actually pleasing, that the turn to regenerative energy supply already shows so many visible results, that the hint "Meeting at the wind power station" can confuse foreign visitors despite accurate directions.

The two triggered the biggest surprise by asking at a farm nearby, at which of the many wind power stations we naturists would meet. This prompted the senior farmer to drive to our meeting point and inquire, why there were so many vehicles parked at the wind power station nearby.

He smiled, as he asked, if we were the ones, who had hiked and cycled nude in the area a few weeks earlier, and if we were the ones, who had dinner in the nude in the restaurant "'Das kleine Kartoffelhaus'" [en: The Little Potato House]. We confirmed that. He informed us, that the parking lot at the wind power station is actually reserved for the operator of the wind power station, who occasionally has to bring large-scale equipment there, to carry out maintenance or emergency work. He allowed us to park on his private property for the day. Our tour was rescued!

At the beginning of the following week, two of us visited the farm, to say thank you with a bottle of good regional, wood-barreled corn schnapps and a "Thank you!" card. They were lucky, met senior and junior farmer, and a conversation begun. Therefore, we now know, that farmers have to lease the land needed for a wind power station to the respective operator and in return have to contractually commit to keep the spaces at the wind wheels clear. In the future, of course, we will take this into account and will no longer park at wind power stations. 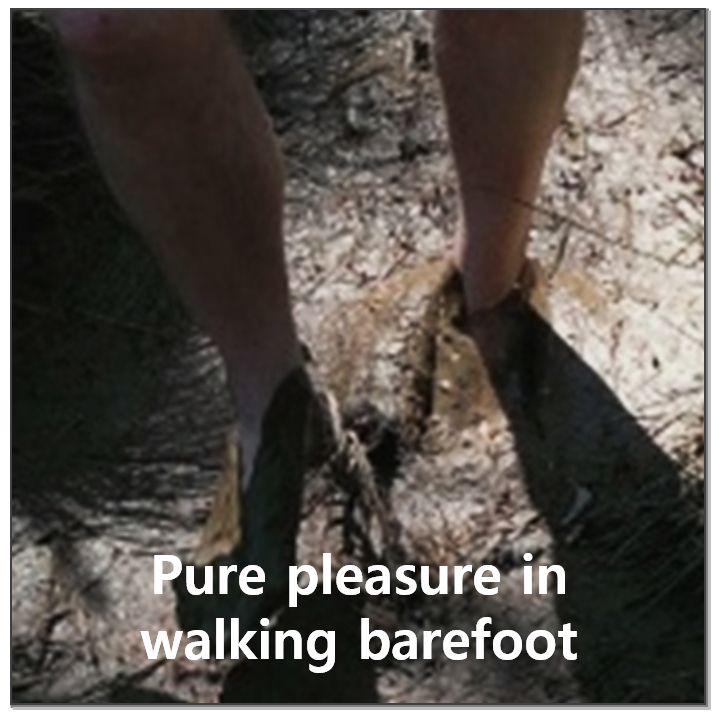 When such gentle paths lure, pure pleasure … … in walking barefoot comes up: sandals taken off, because they can be carried better in the hand instead of on foot. You can hardly let the feet sink more gently in, than in such a comfortable environment! Instead of walking on barefoot trails, I use t... 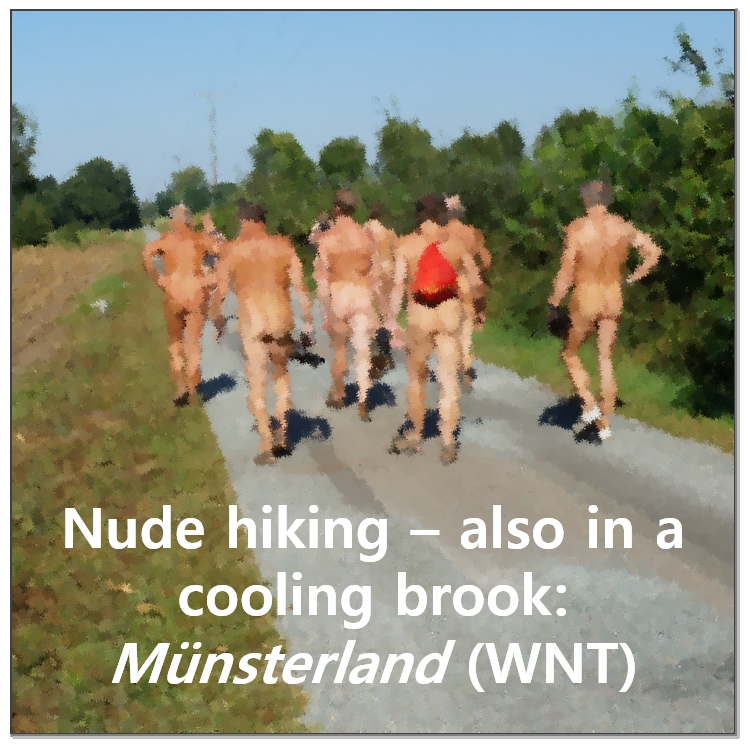 ► Nude biking and hiking weekend in Münsterland  ► Nude hiking in south-west Münsterland Hiking in the buff – sometimes also barefoot on rough ground Barefoot On crushed stones? Brrrrr! The last Sunday in September once again offered a high summer day with temperatures of up to 28 °C an... 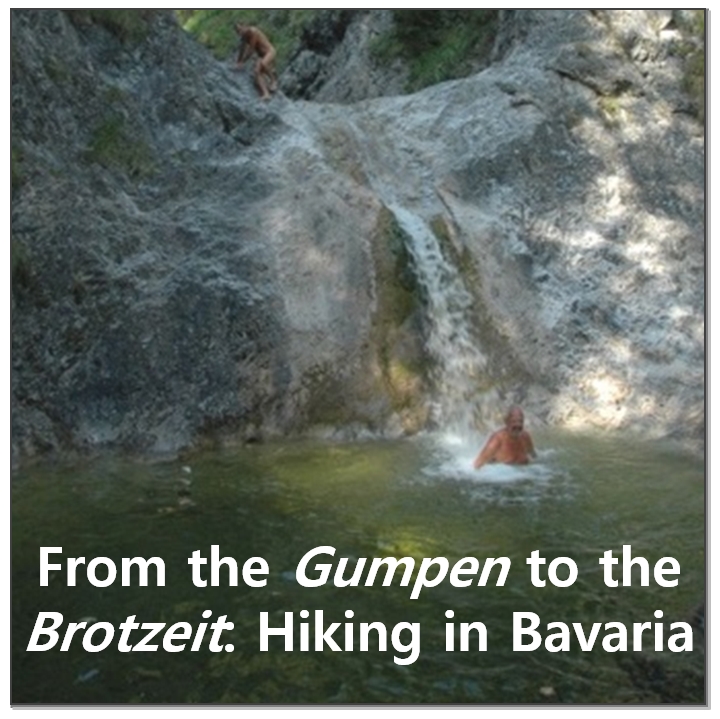 ► Late summer naturist meeting in upper Bavaria Meadows at the Isar Two prussians*) (from Thuringia and North Rhine-Westphalia) informed themselves a few days before 'Nude Alex' offered a hiking tour to some 'Gumpen', about naturists at the 'Isar' River. They met with naturists living there a... 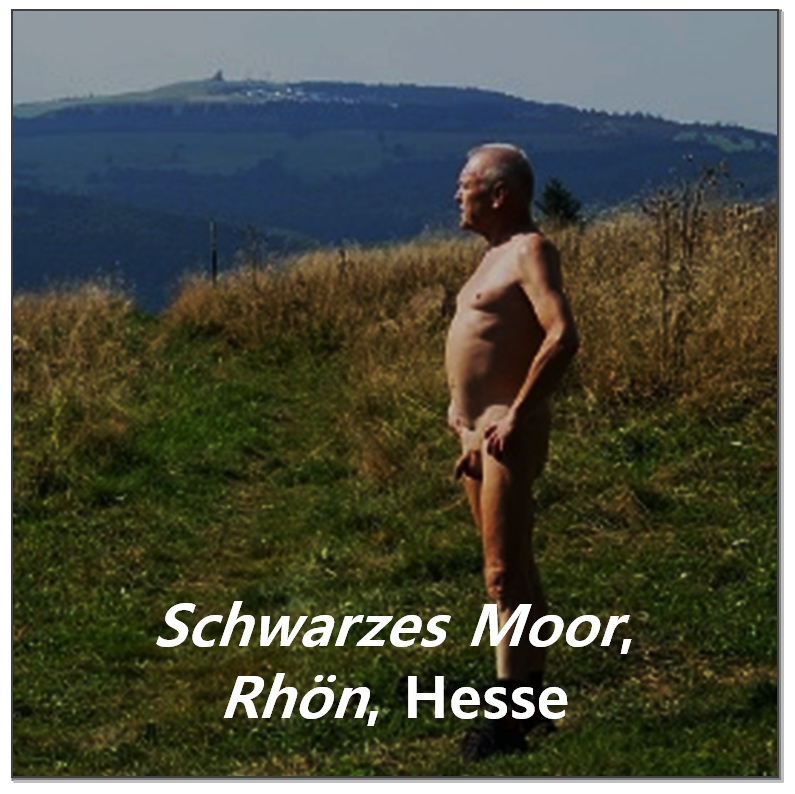 ► Sat 10 September: Circling the 'Schwarzes Moor' Circle path around the moor On Saturday, we circled the area of the 'Schwarzes Moor' . Compared to similar hikes in earlier years, we met far more hiking groups on the tour: All approx. 25 encounters with textile wearers proceeded joyously ... 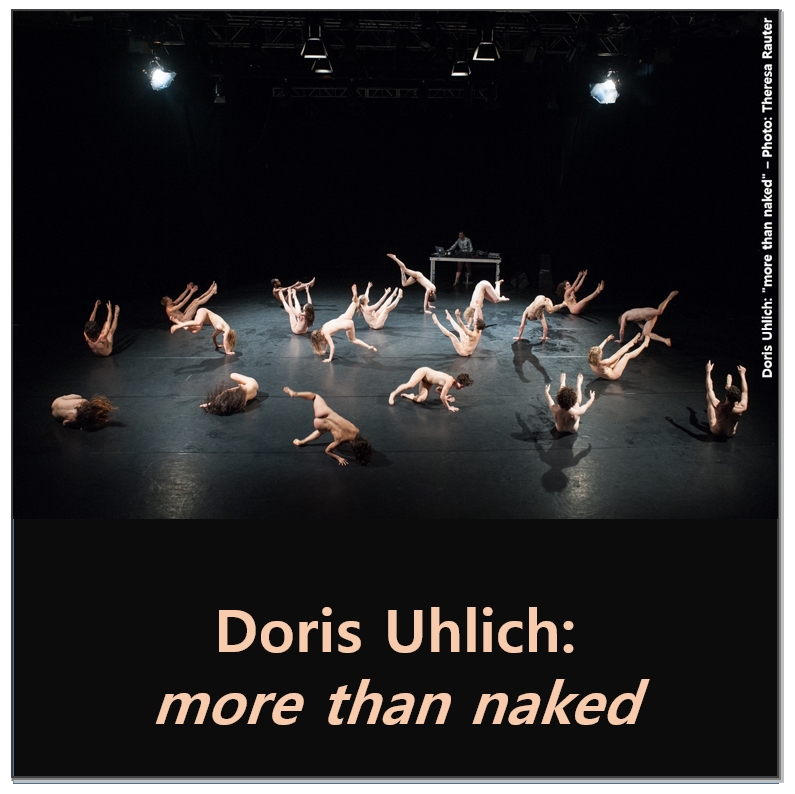 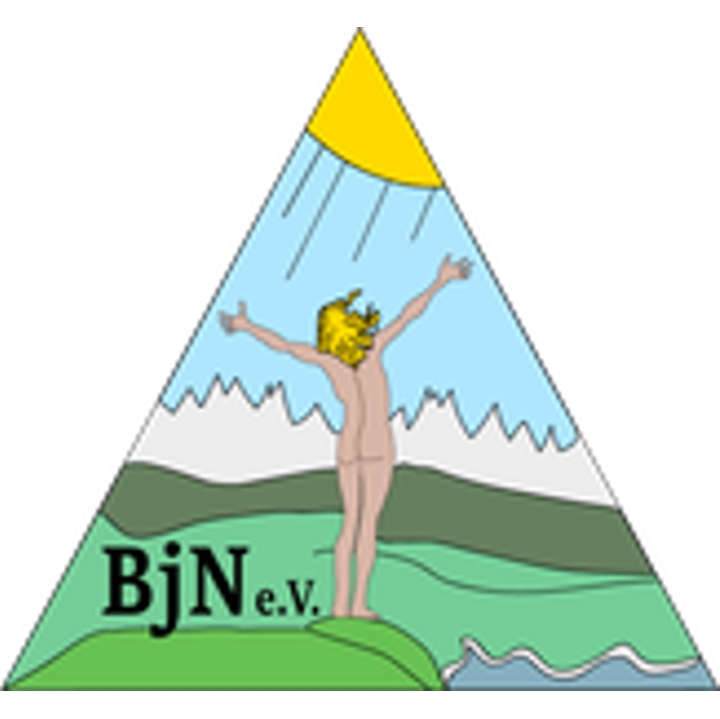 The BjN = 'Bund junger Naturisten e.V.' is active since 2016 and initiates naturist excursions and holiday camps for young naturists. The members themselves decide, which initiatives are to be taken. A project worth supporting!   Fidus, 'Lichtgebet' In August 2016, the young naturists went ... 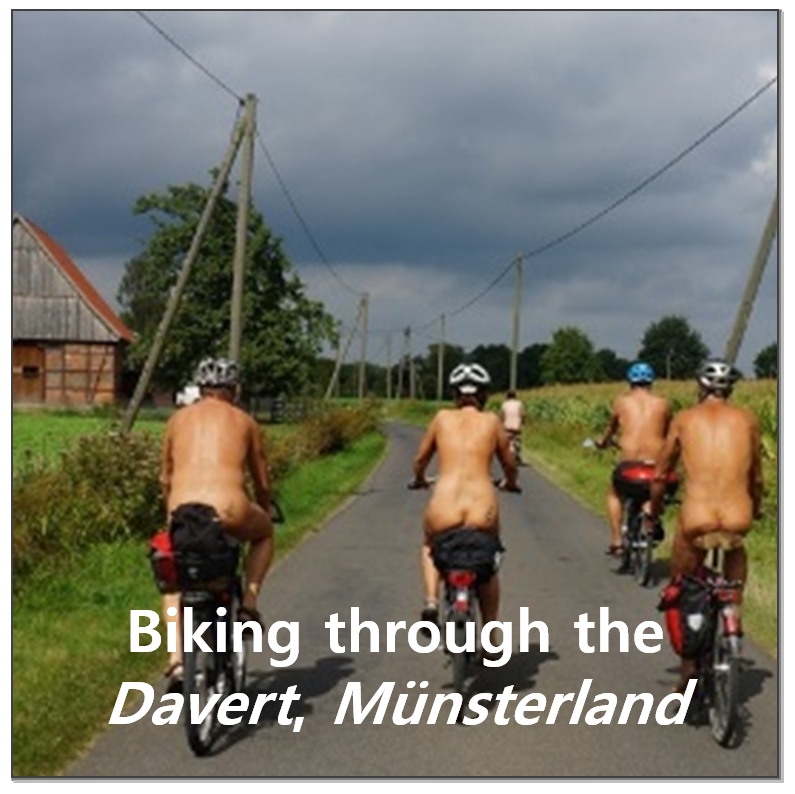 53 km and some local highlights along the route The 'Davert' is the largest contiguous forest area in 'Münsterland', which until approx. 1800 was nearly always wet and foggy and was considered scary and dangerous. Only then did they start digging ditches for drainage. Nude biking The start o... 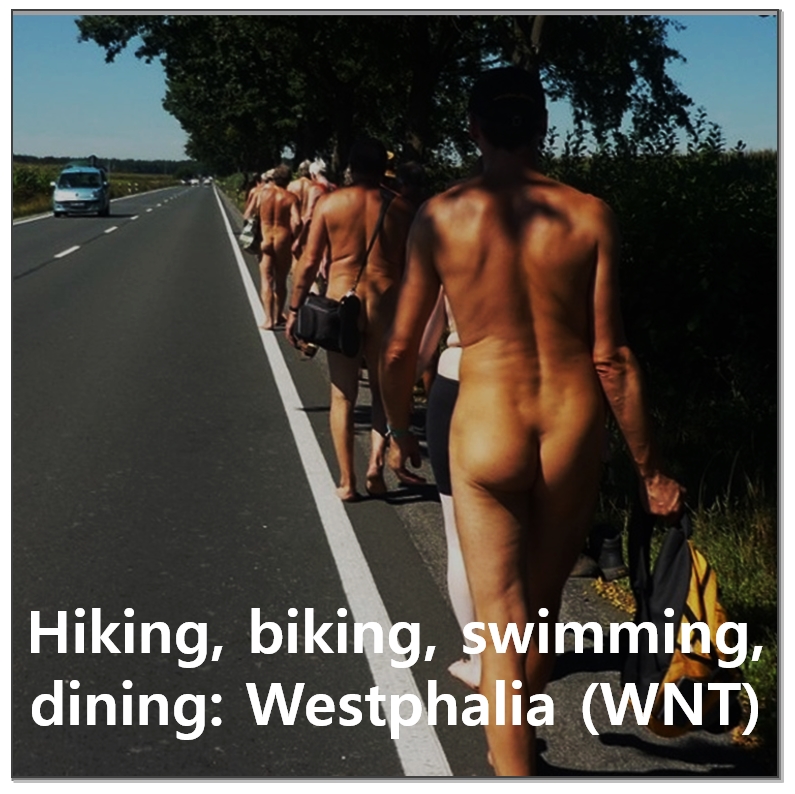 We could enjoy a bright blue sky and temperature up to 34°C for the first hike of the Westphalian Naturist Catch-up Days, i.e. those nudevents, which we had to cancel last June due to bad weather conditions. And during the next days, it is going to be quite similar!  ► Thu 25 Aug: Participant's... 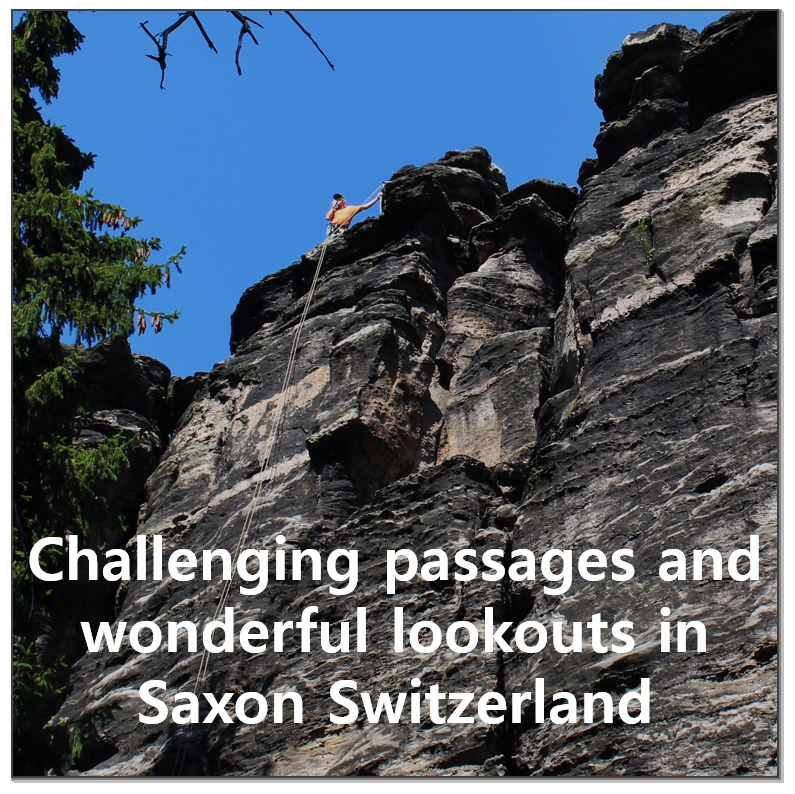 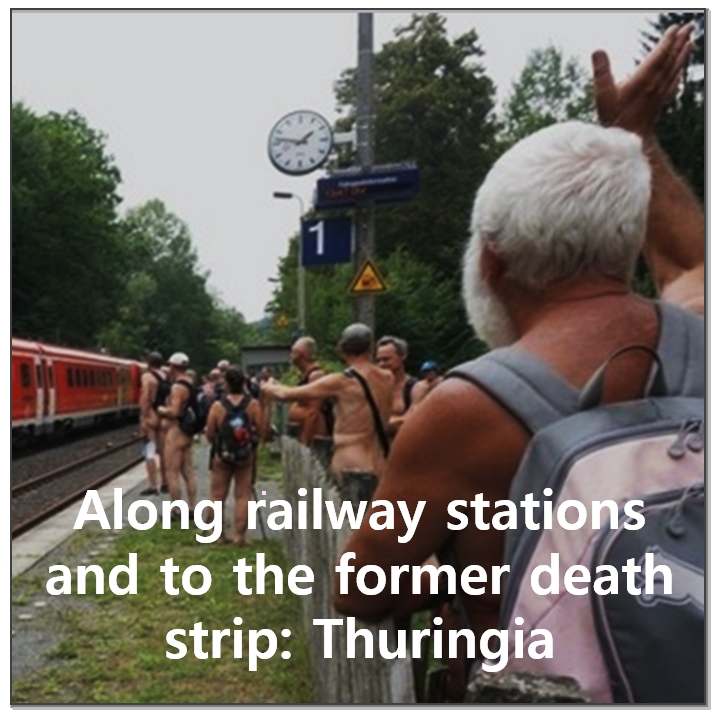 Until 2014, Andreas initiated several times weekends of nudevents. In 2015, he made nine days of nudevents at a time possible. So, naturists could explore Thuringia more in-depth. Also, this was a motivation for some naturists, to travel from quite far distances and perhaps extend their stay for p... 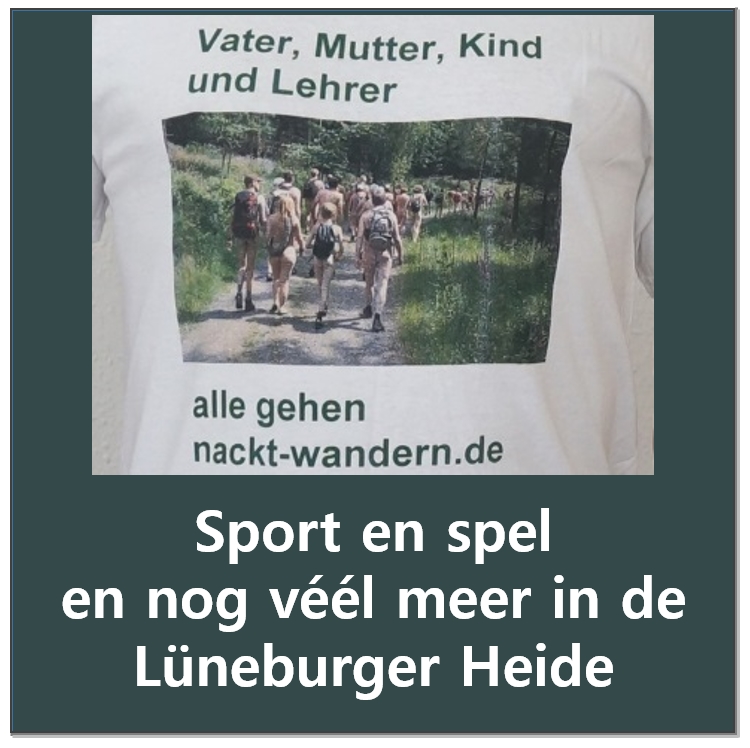 We had a lot of sports and fun with nude hikes and a canoe trip in the nude. Up to 20 naturists attended the naktivities. Musical entertainment in between provided the “Blues, Roots, and Song Festival” in Schneverdingen – just a reason to come back. The aficionados of nude sports from all over... 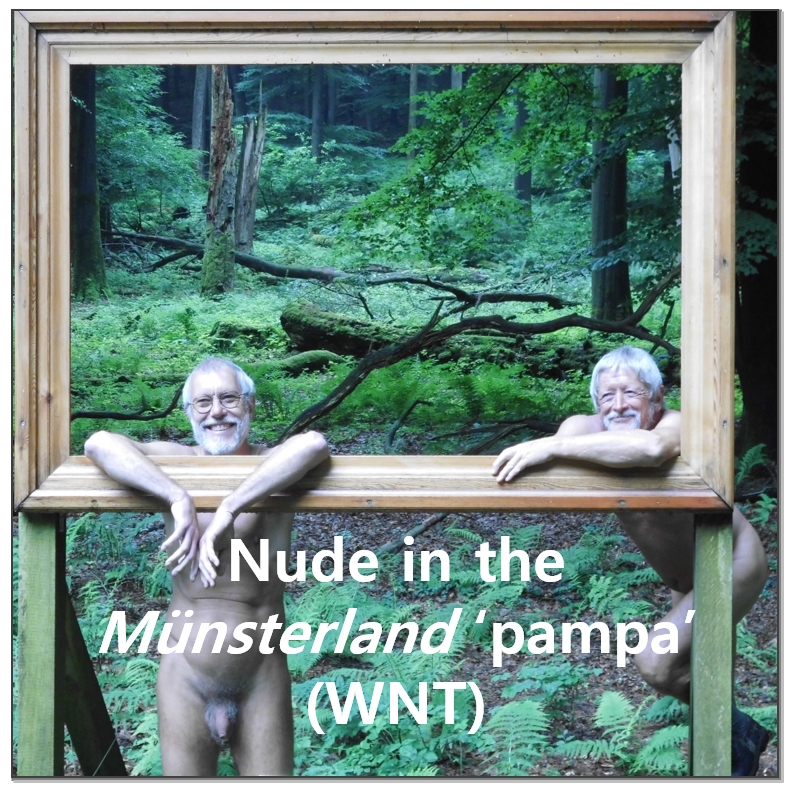