Is that really allowed?

– What about the police?

– What about the law?

Comprehensive inspection of the legal situation 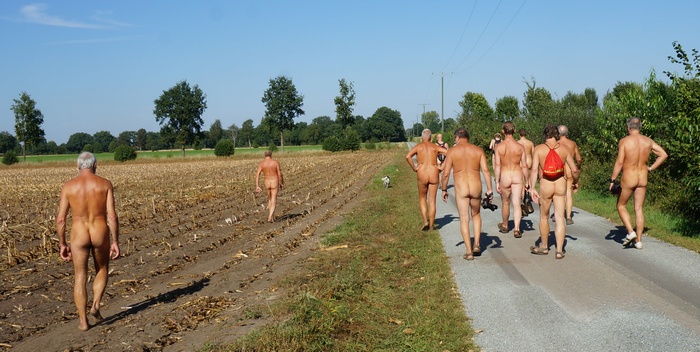 Nude hike in 2016 in the Münsterland, Germany

Naturalia non sunt turpia – The natural is not disreputable.

Since Vergil (roman author Publius Vergilius Maro, 70 to 19 BC), next to Horace the most important Roman poet, we know: The natural is not disgraceful. Why should there be an interdiction to be natural, at least in the wild? Of course, there are places and occasions where nudity is not appropriate and is perceived as disturbing.

In many countries, simple nudity (without sexual intention) is not forbidden – except in certain places.

To move naturally in nature is a natural right of every living being, including humans.

This natural right can, however, be limited by law, which people living together in a country have passed to regulate their coexistence and to find an orderly solution in cases of conflict – if necessary with the help of an (arbitrating) judge.

What about the police?

Police has the duty, to maintain order and security and to take action against violations of the law. Simple nudity is not even mentioned in law of many countries, but is treated as a criminal offence in others. Therefore, in many countries the police will not act on their own initiative because of simple nudity without sexual intentions or actions. As long as you keep order and don't break the law, the police would not care what you do. That means above all: Do not start a quarrel with others or let yourself be involved into one. Because if citizens attack each other or others' property, the police must must intervene to restore peace and order: just conciliate. And only those who have behaved badly (i.e. theft, damage to property, bodily injury, insult – in general: a criminal offence or a misdemeanour) will be subject to a formal treatment by the police.

Being nude out of naturist motivation is nothing forbidden in many countries. But if the police is called and have to mediate, because another citizen believes, that nudity is a bad thing, the police may ask the naturist to dress. It only done to avoid any further dispute.

But sometimes, even police officers believe, that nudity is forbidden, even if they are serving for a country, where this is not the case. Police officers are not trained in law that comprehensively like lawyers or judges, but only to the extent, that they can perform their duties. And when unusual questions such as »Is it okay to walk nude along country lanes?« occur, they may have to ask the legal department first.

What about the law?

Law always has a limited scope: It applies in states, in federal states, or in municipalities. So, you always have to take a close look here, because completely different law may apply in different necks of the woods.

In most countries, public nudity is prohibited only, if it serves for sexual purposes. In some countries, however, public nudity is generally prohibited and may be prosecuted as a criminal offence. Other countries – e.g. France – use terms in their legal texts, that do not clearly define, what is exactly meant. Here, you can only have a close look at the legal practice and figure out, which judegments courts have made in the past – the legal practice, however, is subject to change over time.

Whether you are allowed to be nude or not – you should inform yourself about it beforehand.

Comprehensive inspection of the legal situation

The natury website offers a comprehensive inspection of the legal situation – subdivided by country – in the chapter Nudity and law.