We dedicate the natury website to the topic of naturism. We show, that nudity was not only a natural state as a matter of course in the history of man, but still is often today.

We show, that nudity is not limited to naturist beaches and fenced naturist sites, but can be practised outdoors: Hiking, biking, jogging, and many other healthy activities.

The Reports section provides numerous reports with videos and photos about activities in the nude.

Nude life presents the practice: We describe a lot of types of activities in the nude and depict experience thereby. Here, we also take a look at the legal situation and realise: Being in the nude is not forbidden – except in some places, for which people have adopted special rules.

We invite you to join in – even clothed – to try it out, because in a community of nude people it is easier to disengage yourself from the constraints to be clothed. For this purpose, there are numerous opportunities for activities in the nude ("naked activities" ⇒ "naktivities" or "nude events" ⇒ "Nudevents") throughout the year, you may choose from:
– Calendar of nudevents.

Within Naturism, we describe the history of nudity and of clothing, but also, how the modern naturism developed: It began in naturist associations, but then was more and more practised "in the wild". We learn, that the terms "nude" / "in the "nude" and "naked" may have very different meanings.

Visitors of the natury website using an ultra wide screen monitor (2560 x 1080 = UWFHD) faced the issue, that the right ("sticky") menu partly interfered with content in the main part of the website, so that you could have difficulties to read text or click links:

Therefore, the layout of the natury website has been modified:

From Sa 1 to Sa 8 August 2020:
NEWT, Austria
– Report(s) concerning naktivities / nudevents in this region or country

From We 22 to Th 30 July 2020:
Naturist days, Germany, Saxon Switzerland
– Report(s) concerning naktivities / nudevents in this region or country

These days remain in my very pleasant memory, even though we women were generally very underrepresented: With a number of participants of 20 to 40 only about 5 women 'dared' to participate. I was with my partner, so I felt safe in the group. In addition, the size of the group and the self-confidence of some experienced participants gave me enough courage to face dressed people, whom we rarely met on our hikes, but whom we did meet from time to time. Most of them were friendly, understanding, and also curious, but some were also severely irritated.

These made me think, why do I want to walk around nude outside!? To this I say, if the surroundings are right, i.e. it is not in a city or in very populated areas, but rather in areas less frequented by people, then I really enjoy 'contact' with nature with all my senses. By this I mean, not only eyes, nose, ears, mouth, hands perceive and feed me with information about my surroundings, but also skin and feet.

If they are 'locked up' in clothes and shoes, and this is a large part of our body, they are hindered in their perceptive abilities. I was allowed to notice, that my head was incredibly flooded with additional, mostly very pleasant impulses via skin and feet with the processing! So much, that it seemed almost incidental to me, that me and my fellow hikers were in the nude. "Walking barefoot up to the neck" took on a meditative character, so that I was completely occupied with myself and the impulses of the wonderful nature surrounding me.

So, dear women, have the courage! It doesn't matter at all, how woman looks like, or what others, he or she, might think about that. This is not the topic among naturists (at least it is not made a topic)!

The Thüringer Naturistentage (TNT) 2020 [en: Thuringian Naturist Days 2020] offered 10 days (from Friday to Sunday) of varied, naturist activities in Thuringia and in neighbouring Saxon Vogtland. Base station was the town of Zeulenroda-Triebes, where naturists found their accommodation mainly in the bungalow village Zadelsdorf or in the seaside eco-hotel directly at the Zeulenrodaer Meer – as the Zeulenroda Dam is also called in German.

In 2020, initiator Andreas has once again succeeded in presenting naturist visitors from all over Germany, Belgium, France, and Italy with new, first-time nature experience areas in Thuringia as well as in the Vogtland region to hike or cycle in the nude. Thank you very much for all the work – we will be happy to come again!

Hints concerning the buttons of the photo gallery

The entire German-language press reported on the fall of a 76-year-old naturist hiker at the Saale Cascade. He slipped on the only 40 cm wide hiking trail, when drizzle started and fell into the depths. At first, two other nude hikers cleared the difficult path down the slope to provide first aid, but soon rescuers, called by cell phone emergency call, arrived at the injured person, who abseiled down to him and finally carried him across the Saale River. A helicopter brought the injured man to the University Hospital of Jena. 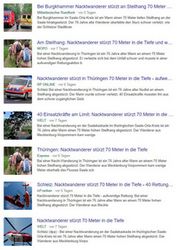 Good news: As if by a miracle, the man did not suffer any serious injuries except for a few broken ribs and countless bruises from the fall!

Several of the nude hikes were accompanied – mainly at the end of the hike – by thunderstorms with heavy rain, such as the hike on the first Saturday near Saalbach or on Monday near Muldenberg in the Saxon Vogtland. But also during the moor tour on Tuesday near Bad Klosterlausnitz, the heavens opened their floodgates, so that some people preferred to visit the Kristall Therme [en: Crystal Spa] there already after their midday rest.

Already in previous years, some visitors to the thermal baths had already implemented the idea of leaving out their clothes for the 50 or 70 meters from the car park to the changing rooms and buying or showing their tickets without textiles. This time, they just wore a mask and, if necessary, bathing flip-flops, which caused the employees of the thermal bath to smile sympathetically or to say "That's not possible!" with surprise. But it did work! 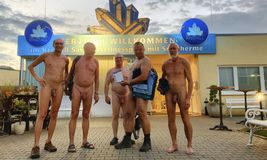 ► Wed 19 Aug: Choices on rainless Wednesday: Hike or bike and push the bicycle 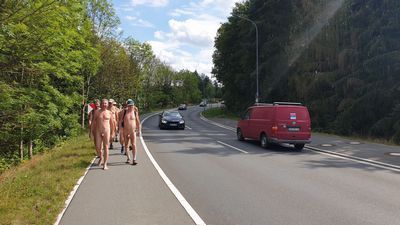 On rainless Wednesday, you could chose between hiking and biking: A group of 12 hiked their paths, optional not only without clothes, but also without rucksack, without shoes: We had our food an beverages in a previously parked car. The circular hiking trail around the Zeulenrodaer Meer Dam led partly over wooded mountain paths above the dam, partly directly along the shore, through small villages, and to the popular Strandbad of Zeulenroda [en: lido]. There, most people could not resist taking a refreshing swim in the nude – or to mingle with the textile-wearing foodies at the ice cream booth and queue for an ice cream. On the further way, some more bathing opportunities were used before the group crossed the bungalow village Zadelsdorf shortly before the finish, passed a beer garden and a playground and met here as everywhere else relaxed people who kindly returned the greeting of the naturists. 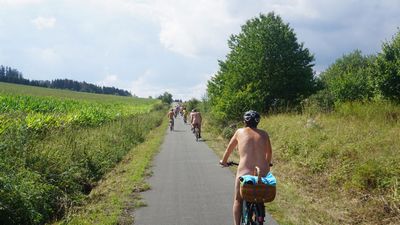 At the same time, 20 nude cycling fans had made their way to Schleiz to take a 40 km round trip from there to the Bleiloch Dam. The tour started and ended on freshly asphalted sections of the "Oberland-Radweg" with mild ascents and descents. At the dam, the naturist bikers overtook for the first time a few families with children, who – when one or the other group had taken a break – met the naturist group from time to time during the further course of the tour and soon got into conversation. Above all, tips were exchanged, when the central part of the route along the dam arms as well as the bypass routes proved to be quite challenging for cyclists: The rain of the past days had partly softened the ground of the field paths, and on the other hand, non-E-bike riders had to push on numerous gradients. 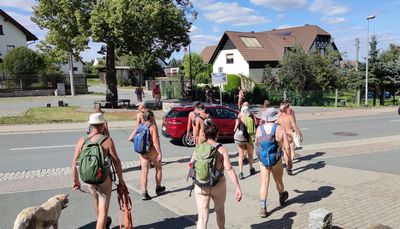 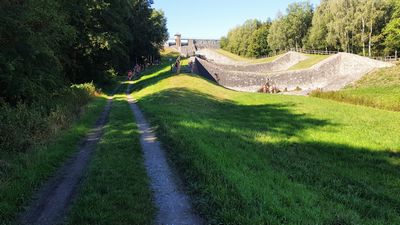 during the second hike in the Saxon Vogtland along the Vogtland-Panorama-Weg, 30°C air temperature in the afternoon became a challenge for the over 40 participants. The nude hikers experienced a significant increase to up to 34°C the following day, when they hiked around the Weida Dam.