The Yawalapiti tribe still lives on a influent of the major river Amazon. Once a year, they celebrate a festival in honour of the deceased. For preparation, the boys up to 10 years fish with bow and arrow. Their clothing is still a ace around their loin, which is, however, widened belt-like at side and rear and attached to the front of a very sparse, rather symbolic apron of a few textile fibers. 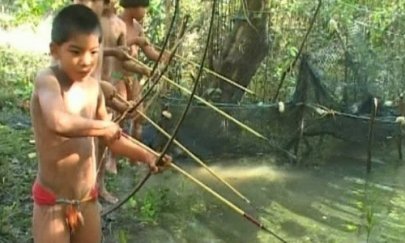 Yawalapiti boys are fishing with arrow and bow. Source: Usenet

The cult of the Yawalapiti

The cult of the Yawalapiti is just one of 16 different tribal cultures of the Xingu Indians. The Brazilian Orlando Villas Bôas and his brother ran an administrative and trading post here from 1946 to 1973 and contributed significantly to the establishment of the Parque Indígena do Xingu in Alto Xingu in 1961, in order to provide shelter for the remaining ethnic minorities.

The photo is subject to Creative Commons licence Naming 3.0 Unported