Many artists around the world integrate nudity into their work on stage or perform in the nude. We have discovered some of them during the Festival ‘Body And Freedom’, which the Swiss artist and organiser Thomas Zollinger conceptually developed and ramped up in 2015 in Biel / Bienne, Switzerland. Other artists raised our attention watching their performances on stage or by browsing the Internet.
“The nude body is commonplace on theatre stages and in art houses, but in urban space it does not appear at all or is only rarely seen, in contrast to sculptures, statues, street theatre, flash mobs, material stagings, artistic statements, and performative interventions. Such artistic expressions are now welcome in public space and are invited to urban festivals, explicitly to stimulate and to irritate. Everything that takes place in art space and theatre can now be shown and performed in urban space – but the nude body seems to remain a taboo here. In the context of the general passer-by public, it is still or again fined or banished, as recent experiences in Biel, Zagreb, San Francisco, Barcelona and England have shown.
The ‘Naked Performance Festival’ wants to change this. It is intended to explore the possibilities of the naked body in urban space and everyday life, and to contribute to establishing it as a means of artistic design. The festival takes place in the city centre of Biel/Bienne, a bilingual Swiss city that is considered tolerant, open, and receptive to experimental projects. However, after a liberal approval procedure in 2009 for a performance with 18 nude people, a ‘Stadtspaziergang mit Nacktakzenten’ [en: ‘City walk with naked accents’] in 2014 was only partially approved. The implementation of the non-approved part resulted in a fine. The ‘Nackt Performance Festival’ 2015 has again been approved by the police. It is restricted to the pedestrian zone of the city centre.”
– Source: “Body and Freedom Festival – Nackt Performance Festival im Stadtraum” (ritualtheater.ch), 2020, translated, layout modified by author 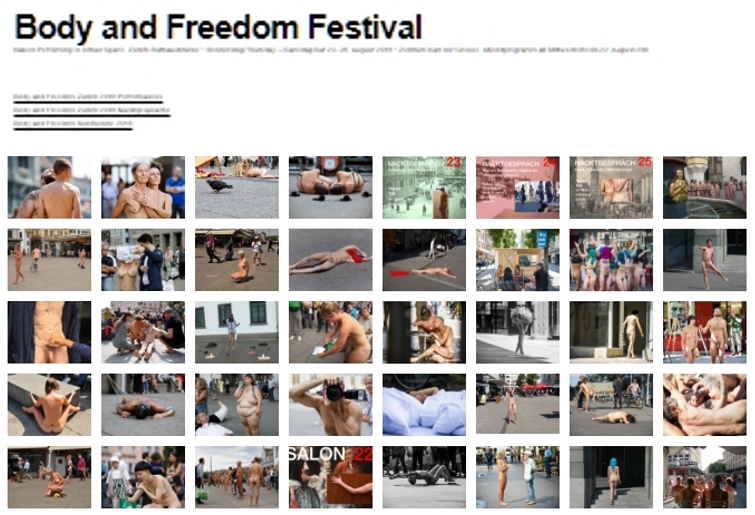 “Thomas Zollinger (1952) lives and works in Biel and Zurich. His work focuses on participatory and performative stagings of the human body, without objects, props, ‘material’. Inspired by encounters with Zygmunt Molik, Walter Pfaff, and others who worked with Jerzy Grotowski or took over the body-oriented training from his ‘Theater Lab’, he developed four performance concepts of ‘Ritual Theater’ (1994-1998). Empty shop premises became theatre spaces open to the outside world with up to 28 participants. In the performances, which lasted at least 6 hours, there was a minimalization of actions, leading to various projects of walking and standing (12 hours walking, 1997). […]
Thomas Zollinger is the initiator and curator of the internationally oriented ‘Body and Freedom Festival’, which explicitly and officially approves the nude body in public urban space. It took place for the first time in Biel in 2015 and again in Zurich in 2018. […]”
– Source: “Portfolio Thomas Zollinger (ritualtheater.ch)”, 2020, translated, layout modified by author